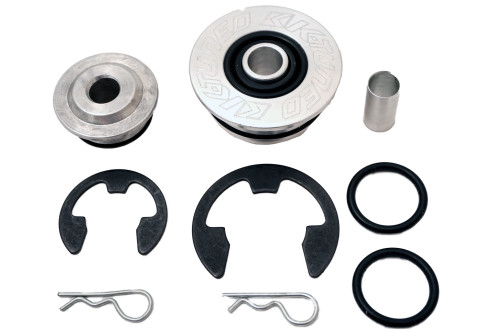 The K-Tuned Shifter cable bushings for Honda K-Series Motors. These bushing feature a spherical bushing with a rubber covering. Also rubber o-rings to ensure a tight secure snug fit thats sealed. The Rubber covering also prevents dirt from getting into the spherical bushing. The install on these are very easy and can be done by anyone with simple tools. A very affordable mod that has been very popular with the tuner crowd and is great for those who prefer a more precise solid feeling.

"Built for smooth, precise shifter feel. These affordable bushings are a great upgrade for any enthusiasts" -- HARDmotion Team

What do they do?:
They help tighten up the shifter feeling (by removing the old worn rubber bushing and replacing it with a solid/fluid bushing). These remove sloppy shifter feel and bring it to a more crisp, refreshed feeling that ensures a more solid feel.