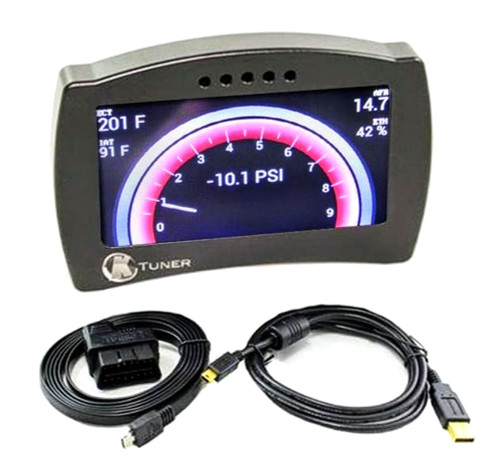 The KTuner v2 is identical to the v1.2 but also comes with a screen. Which can give you all the info and readouts without needing a laptop. Unlike the Ktuner v1.2 which needs a laptop to see on the fly what's going on. With that you are able to load into the screen any data you like. Which not only adds functionality, peace of mind and flat out just looks cool. Building continually on the vehicle list. This tuner can actually work on multiple vehicles and isn't model specific. This allows you to possibly keep the same tuner and buy another car and be able to take your system with you. We love that option. The price on this is also more affordable than other tuning systems which is also nice. Especially since this unit comes with a pretty nice looking screen.

What's the purpose of KTuner?

Great question. These tuning systems not only unlock the vehicles full potential. They allow you to run parts you may not be able to otherwise. Such as high flow intakes, high flow downpipes or even into full turbo systems. Some cars that come with a turbo you can even just raise the boost giving you serious gains for little money. You can raise rpm limits and remove speed governor's. You can also tune for more horsepower and or even better mpg's. We have also seen selectable tunes on certain vehicles with the flip of a switch. The options are nearly endless and always growing.

How does KTuner work?

The system connects via your obd2 port and flashes the stock ecu with a modified version which then provides customization to improve efficiency. You can select the tunes via a computer / laptop and then use the appropriate tune or have a tuner access and tune your car remotely even. Thus giving you maximum output and fuel efficiency from your current setup.

What sort of horsepower gains can be had?

This depends on the model of car, but the newer turbo models at Honda, can see anywhere from 20-50hp added on average, also depending on the supporting modifications.

"This Ktuner tuning system gets better and better by the day, install, select your tune and off you go with added horsepower" -- HARDmotion Team